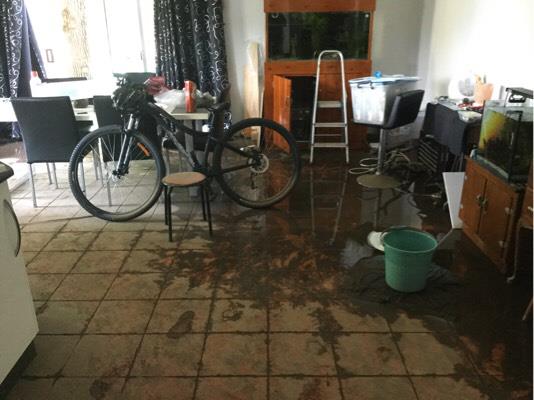 In the aftermath of Tropical Cyclone Debbie we were confronted with a number of concerning situations, none more so than the contamination of properties by water containing sewage, and homeowners who had stayed in the properties because they felt they had nowhere else to go.

The IICRC S500 Standard (3rd Edition), states that Category 3 Water – is that which is highly contaminated and could cause death or serious illness if consumed by humans. Examples: sewage, rising flood water from rivers and streams, ground surface water flowing horizontally into homes.

The IICRC states there are over 120 different viruses that can be excreted in human feces and urine and are present in sewage. These can include Rotavirus, causing severe and sometimes life-threatening diarrhea in children, Adenoviruses, causing respiratory and eye infections, and Norovirus, a significant cause of gastric flu or stomach flu.

There are highly infectious parasitic agents like Giardia and Cryptosporidium that can cause chronic and severe intestinal diseases in both children and adults. Bacterial pathogens in sewage can include Salmonella, Shigella and Escherichia coli.

These organisms contain endotoxins that are released at the time of cell death. Endotoxins can cause respiratory inflammation, airway restriction, create the potential allergic and infectious disease responses and when inhaled they may adversely influence the central nervous system.

How does water get in to a property?

There are two ways in which water enters a building:

As was the case in TC Debbie, the lack of power and isolation due to flooded roads meant that many properties what were impacted by top down clean water, were more seriously damaged because of the absence of power and specialists to remove the water and dry the impacted areas before it becomes blackwater.

What can be done in the aftermath of a Natural Disaster when there is no power?

If power has been interrupted it is critical that ventilation is maximized.  Fresh moving air discourages the growth and amplification of microorganisms. If safe to do so, windows and doors should be opened to air the structure out thoroughly. It should also be understood that ventilation reduces, but does not eliminate, inhalation of microorganisms.

Ensure some form of personal protective equipment is worn and carefully clean all tools with appropriate detergents after use.

If items such as carpet have been saturated and there is no means of extracting the water and drying the items within 3-5 days, the wet and unsalvageable carpets and soft furnishings should be photographed and removed to allow for better air circulation before microbial growth can occur.

While it is likely that other flooring and even structural components such as wall frames have been exposed to contaminants in the water, the risk in stripping out wall linings and flooring should be carefully considered based on the age of the property and each individual situation, due to the potential for asbestos and electrical wiring being exposed as part of the strip out.